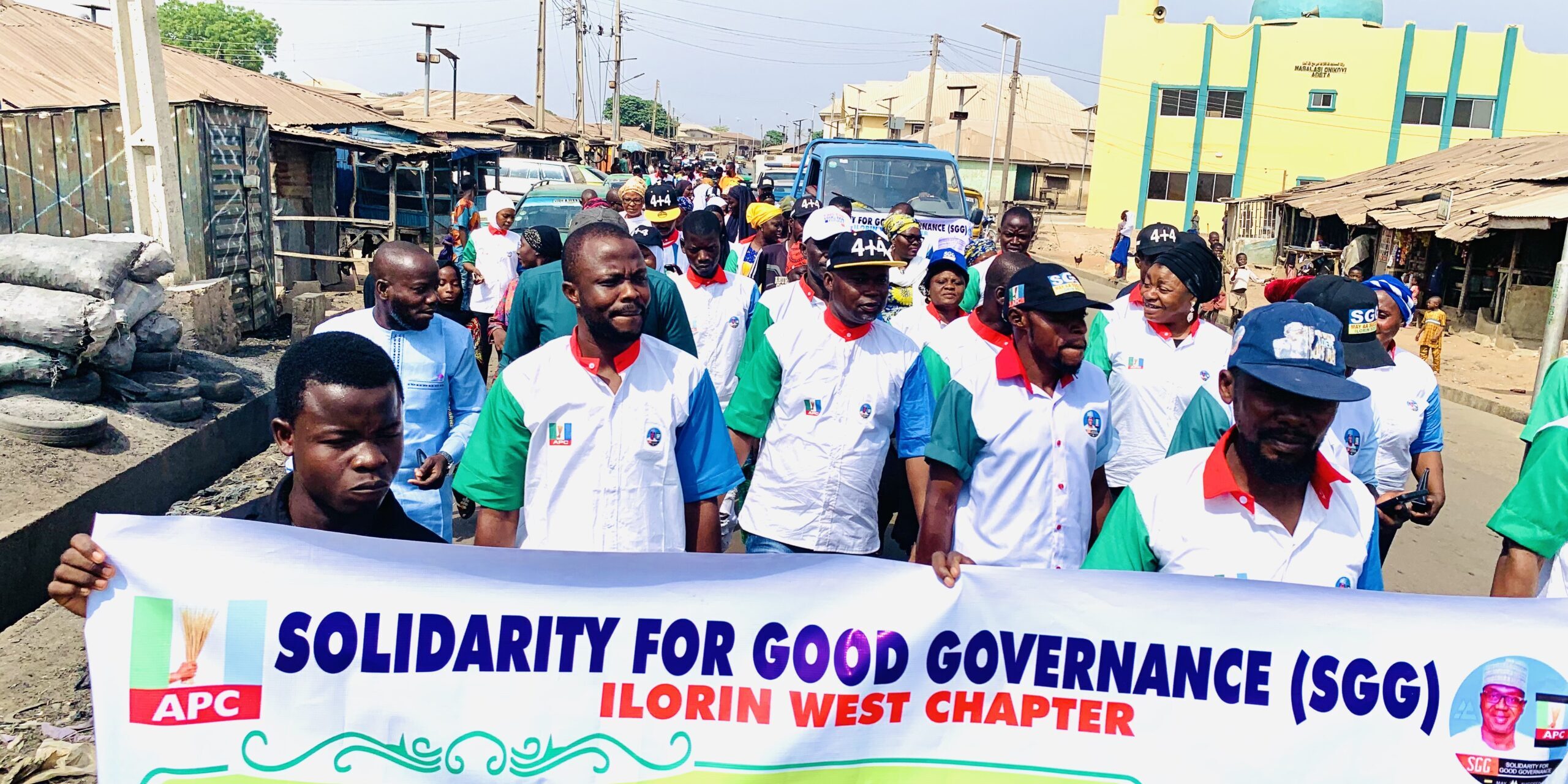 A pro-Abdulrahman Abdulrazaq rally to signal the continuty agenda of Governor AA in 2023, on Sunday, March 6, 2022, shut down Ilorin, capital city of Kwara State.

Women and men from all walks of life, public figures, top politicians, artisans, civil servants, Okada riders, drivers, mechanics, market women, students, youths, old and young and even the crippled and others with several disabilities joined the social movement and pro-good governance group of Ilorin West chapter of Solidarity For Good Governance headed by Comrade Babatunde Sikirullahi Ayinde and Founded by a political strategist and ideologist, Comrade Abdulmajeed Wahab Temidire (Aburo Gomina) to march through the capital city.

They were clad in several campaign attires which had several inscriptions such as “AA leads, we follow”, “In Abdulrazaq we trust”, “AA is our Leader”, and “Support continuity 2023, Ijoba Mekunu.” The mammoth crowd who displayed their voter cards, sang songs and danced under the sunless weather in support of a man they believed in.

The huge turn-out was as a result of an earlier grassroots mobilisation of the convener of the sociopolitical group, Aburo Gomina, ahead of the 2023 gubernatorial poll which would be done some months to come and the unprecedented huge investment this administration has embarked upon in all sectors of the state such as education, health, works, water, agriculture, technology amongst others.

A standby music band, ketere and Agorin Gomina, which was part of the rally provided sweet songs in appreciation to the public as the crowd marched through the city. The mammoth crowd started the rally from convener office and at the same time, the country home of His Excellency in Adewole, Ilorin.

In his statement, the Ilorin West Coordinator for the SGG, Comrade Ayinde Sikirullah said, “We are holding this rally to show the opposition, the aggrieved and the entire world that the people of Kwara are on our side. The era of rigging, one-man leadership and money bag politics is gone. We have defeated them in March 2019 but they said it was the Federal power that won the election but we understand that God Almighty gave us the success by making Kwarans stood by us.

Today we are celebrating the victory of light over darkness in March 2019. On that day, the power of the people prevails over those of them in power. Kwarans spoke in one voice and had our humble Governor Abdulrahman Abdulrazaq elected to turn around our fortunes. Today, Kwarans are living witnesses to the difference in our government.”

We have had a personality at the first 3 position in this country, even from Ilorin, and we have had amongst them those who were working with the Presidency. But they are self-seekers who do not believe in the Kwara project. They were the people, who during their sixteen years reign here plunged our state into debt and destroyed the economy of the State. They made our State to be indebted, till years like forever, by their maladministration.

Years in office, they cannot point to a single benefit derived from their government by Kwarans without inflated costs and destruction/abandonment of the infrastructures/projects of their predecessor. We are therefore saying never again to these looters, financial devourers and enemies of our State who only believe in themselves and not in the progress of our State.

READ ALSO:  Why most businesses fail

Nigerians should note that since Governor AA took over the mantle of leadership of Kwara State, no politically motivated attack or violence had been witnessed and no life had been lost to political violence in Kwara State.

Today, despite the way and manner they wrecked the economy of the State; Governor Abdulrahman Abdulrazaq administration has been able to chart a new path for the development of our state. This can be seen in the physical developments witnessed in the State since he assumed office.

Kwarans must rest, be assured that Governor Abdulrahman Abdulrazaq will leave no stone unturned to make the state a better place for all. Also, by the grace of God, he will not leave this state a debtor of salary. Though, they thought by now that this government would have failed. But by Kwarans undiluted support, we have gotten this far, by His grace.

I wish to state that as we approach the 2023 election, this continuity that seeks will not be at the expense of the blood of any Kwara person. If I have my way, I will call for an election today for Nigerians and the international community to see that anytime, any day, PDP and any other opposition party will be roundly defeated here.

Basheer is a Media Strategist from Ilorin, Nigeria.
He can be contacted via [email protected]