MAN CITY VS PSG: Seven lessons you should know 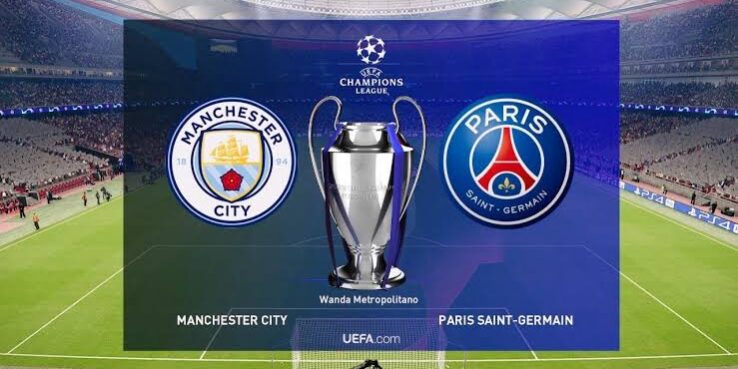 Manchester City advanced to the Champions League final for the first time in their history after Riyad Mahrez scored twice to secure a historic win over a ragged Paris Saint-Germain side.

Mahrez opened the scoring in the 11th minute, finishing off a City move that started with goalkeeper Ederson playing a perfect pass over the top of the PSG defence to release Oleksandr Zinchenko.

PSG captain Marquinhos hit the top of the crossbar with a looping header, before Angel Di Maria missed the target from 30 yards after City had given the ball away and with Ederson off his line. 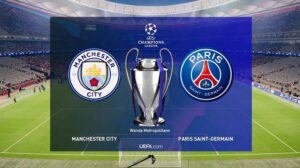 TheEnglish side continued to defend after the break, with Ruben Dias and John Stones exceptional in the heart of defence, before they punished PSG on the counter attack after the hour.

Mahrez finished off a flowing move to score his second on the night and put the tie beyond the visitors. PSG, whose discipline was on the edge throughout the match, were reduced to 10 men after Di Maria was shown a straight red card for kicking out at Fernandinho.

#1. City and Guardiola re-write the script

City have mostly experienced heartbreak in the Champions League under Guardiola, with each of their knockout defeats to Monaco, Liverpool, Tottenham and, last season, Lyon resulting in either embarrassment, injustice, or disbelief.

In reaching their first final, they have re-written that story. They didn’t have things all their own way tonight, and were guilty of giving the ball away in dangerous areas on numerous occasions, but they stayed calm, defended in numbers when required, and, crucially, took their chances when they came.

Mahrez’s goal just after the 10th minute came from a move that we have become used to under Guardiola, but one that we should not take for granted, with Ederson releasing left-back Zinchenko with a perfect pass downfield that caught PSG off-guard. It was a play that came from bold design, executed to perfection – an encapsulation of Guardiola’s best work.

The second was even better, with the weight and precision of City’s passing on the break slicing PSG open and allowing Phil Foden to put the ball on a plate for Mahrez at the back post.

Guardiola’s side have failed to show what they are capable of at crucial stages of this competition in recent seasons, but City’s road to Istanbul has been exceptional, with six victories in a row in the knockout stages – no English side has done that before. It will count for nothing, however, unless City return from the Ataturk Stadium with the Champions League trophy on 29 May.

If you had to pick one factor to explain why City have finally made it past the semi-finals, though, it would have to be the arrival of Ruben Dias in the heart of their defence.

The signing of the Portugal international this season has had a transformative effect on the team and its ability to keep their composure in difficult situations. At just 23, he exudes a presence of authority and maturity well beyond his years, which was on display through the second leg at the Etihad Stadium as City came under pressure from PSG but never looked unsteady.

Dias has also had a huge impact on the performances of John Stones, who moved one match closer to capping his comeback campaign with a Champions League title. Dias has led by example, proving that while prowess on the ball is important, a defender’s value is defined by their ability to win their duels and protect their goal.

City’s defence was immense against PSG, with Dias throwing himself at the ball to make blocks on countless occasions. That pride for defending has seemingly spread around the side, as the celebrations that followed Zinchenko’s block on Neymar’s shot early in the second half showed.

Dias might be the best, and most important, defender in the world at the moment – and it has taken City to the Champions League final.

Ruben Dias was exceptional in the Man City defence.

Not for the first time, PSG unravelled in a crucial Champions League match – as their star player watched on from the sidelines.

The French side lost the plot after Mahrez scored his second goal, with Di Maria receiving a needless red card for kicking out at Fernandinho to all but extinguish his side’s hopes.

In truth, they looked dashed long before Di Maria trudged down the tunnel, or before Mahrez rounded off City’s ruthless counter-attack.

Mauricio Pochettino’s side were toothless throughout the 90 minutes, despite having a good share of possession, as they desperately missed the injured Kylian Mbappe – who sat out with a calf injury.

It hurt PSG even more that his replacement was anonymous. Mauro Icardi barely had a touch in the first half, with all of PSG’s attacking play in the final third coming through Neymar, Di Maria or Marco Verratti.

You could say that was because of another dominant display from Dias and Stones – who kept Mbappe quiet in the Parc des Princes last week – but while the Frenchman looked to stretch City by making runs in behind, Icardi offered nothing to Pochettino’s side.

It was not the first time, either, that PSG had suffered misfortune at a crucial juncture of their season.

In 2018 and 2019, Neymar was missing from PSG’s knockout defeats to Real Madrid and Manchester United respectively, with the world’s most expensive player injured when his team needed him most. The same applied to Mbappe here, as the Parisians’ wait to end their quest for Champions League glory goes on, but, again, they also have themselves to blame.

Kylian Mbappe was an unused substitute in Manchester

It was almost Déjà vu for City inside the opening six minutes, as referee Bjorn Kuipers pointed to the penalty spot for an apparent hand ball against Zinchenko.

Bizarrely, replays showed that the ball had actually hit the Ukrainian’s shoulder and the decision was quickly overturned after Kuipers consulted the pitch-side monitor. 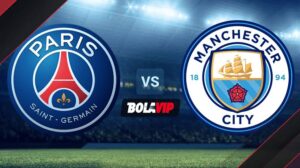 For City, it was a welcome relief after several examples of refereeing decisions going against them in the competition.

It was also a good moment for VAR, highlighting its importance in ensuring an incorrect decision was not able to affect one of the biggest games of the season.

This was a clear and obvious example of a clear and obvious mistake, exactly the sort that VAR should be used for. If VAR could somehow be reduced and scaled back so it was only used in these instances, its relationship with football fans would immediately improve.

#5. Neymar and his Game Paucity Style

Earlier before the match, he was credited to a conference interview to said, “I will do everything possible to win the match (and qualify to final) even if it will cost my blood on the pitch”. Sadly, until the final whistle blown, Neymar Jr could only play with his beautiful footwork dancing and romancing the ball, he was seemingly far from ready to sweat let alone shedding blood.

In most game play, he would stop at the flank for time enough to call “hippopotamus” by a stammering fellow. He allowed city’s reshaped pattern.

With City’s place in the Istanbul final confirmed, the question now is who Guardiola’s side would prefer to face.

Chelsea host Real Madrid in the second semi-final tomorrow night, so whoever goes through we’re set for a ‘new’ Champions League final match-up for the third season in a row.

Thomas Tuchel’s side would, of course, be a familiar opponent, and there would even be a dress rehearsal of the final with the teams meeting in the Premier League this Saturday.

Chelsea beat City in the FA Cup semi-finals last month and Tuchel’s game plan worked perfectly as his side restricted City to few chances. Would that knowledge give them the advantage?

City beat Real Madrid in the last-16 last season, but Zinedine Zidane’s team would have experience on their side if they met in the final. Madrid’s squad is full of big-game players who know what it takes to win this competition, which could give them the edge in a one-off match.

Whoever they face, City will have few distractions ahead of the 29 May final as they could have the Premier League title wrapped up as early as Saturday – if they beat Chelsea at the Etihad Stadium.

#7. What do you think could be another lesson learned?

Drop it in the comments section.