President Buhari’s trousers: a diversional therapy from what is mattermost 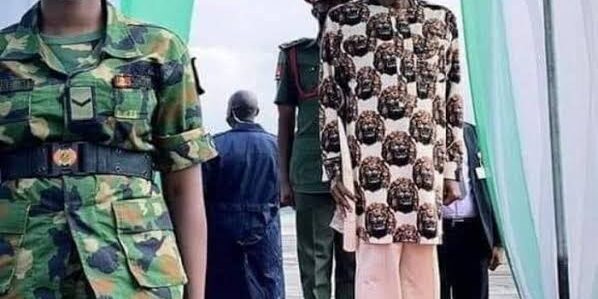 With oil prices falling, inflation, unfavourable government policies, monetary policies, inadequate infrastructures and power supply, inadequate health facilities, alarming rate of insecurity, ineffective leadership and corruption, over-reliance on oil, high unemployment rates and rampant poverty, Nigeria stands divided. As of 2019, the National Bureau of Statistics shows that 40% of the population in Nigeria is living below the poverty line. With these major factors hurting the Nigerian economy, Nigerians always create ways of keeping themselves busy by catching cruise with happenings, especially, through the government officials.

Diversional Therapy is not just about passing the time, about being entertainers or babysitters. As an unknown author once said, “Recreation’s purpose is not to kill time, but to make time live; not to keep people occupied, but to keep them refreshed; not to offer an escape from life, but to provide a discovery of life”.

During his visit to Imo, Buhari inaugurated the first phase of Naze/Nekede/Ihiagwa/Obinze link road, Balloon Driven/Flood Control Tunnel and Egheada Bypass road. He also held a meeting with stakeholders from the south east zone of the country. Buhari arrived Imo despite the sit-at-home order given to south-easterners by the separatist group, the Indigenous People of Biafra. The group had also threatened to attack the president.

However, the President or the fashion designer who sewed the trousers President Muhammadu Buhari wore during his visit to Imo State on the 9th September 2021 by now, should have seen their names been called out by thousands of media lords for the outfit. To the President, the media outcry wouldn’t have significant effect but to the tailor, I am not sure such a person ever faced the heat sound of media war.

A photo of President Muhammadu Buhari allegedly doctored by the Indigenous People of Biafra (IPOB) during his visit to Imo on Thursday caused a stir on social media. The president was teased mainly by young persons who felt his pair of trousers were not properly trimmed to fit with his slim figure. 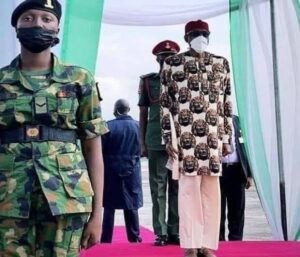 As one old gentleman put it, “Son, I don’t care if you’re stark nekkid and wear a bone in your nose. If you kin fiddle, you’re all right with me. It’s the music we make that counts”, Robert Fulghum. The sage might have Nigerians, especially her youth, in mind. The citizens have a special way of catching cruise from any happening in the country without minding what is mattermost.

Truth be told, the fashion brand erroneously presented itself for social condemnation. Could we say the brand wasn’t informed about the personality to wear the dress? In reality, if the dress had gone well with fashioned-hungry Nigerians, the brand might have by now, secured a positive facelift. A poor representation of mastery to the world.

On the flipside, Nigerians are attracted more to distraction than facing the real matters. One would ask, what effect is the poorly trimmed trousers has to the socio-economic development of the country? Some youths even called for the arrest of the tailor. For what? Hardly would you see anyone analysing the economic importance of the projects commissioned nor the thumb lords have time to evaluate the quality of the projects done. The social media streets got busy with tearing down the president and the tailor.

Do appearances matter as much as action does? We often forget that governments exist to do and not just to be. We thus focus on the means of being rather than the product of doing. This bias leads to governance indicators and reforms that emphasize perfection of means, often failing to make a connection to the ends or even clarifying which ends matter.