The Omanhene who Liked Riddles 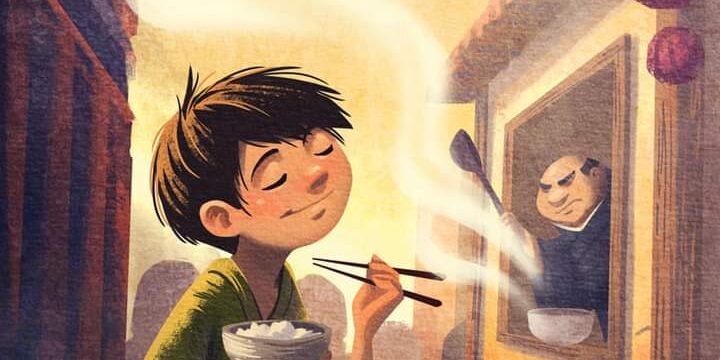 The Omanhene is the chief of a village. A certain Omanhene had three sons, who were very anxious to see the world. They went to their father and asked permission to travel. This permission he readily gave.

It was the turn of the eldest to go first. He was provided with a servant and with all he could possibly require for the journey.

After travelling for some time he came to a town where lived an Omanhene who loved riddles. Being a stranger the traveller was, according to custom, brought by the people before the chief.

The latter explained to him that they had certain laws in their village. One law was that every stranger must best the Omanhene in answering riddles or he would be beheaded. He must be prepared to begin the contest the following morning.

Next day he came to the Assembly Place, and found the Omanhene there with all his attendants. The Omanhene asked many riddles. As the young man was unable to answer any of them, he was judged to have failed and was beheaded.

After some time the second son of the Omanhene started on his travels. By a strange chance he arrived at the same town where his brother had died. He also was asked many riddles, and failed to answer them. Accordingly he too was put to death.

By and by the third brother announced his intention of travelling. His mother did all in her power to persuade him to stay at home. It was quite in vain.

She was sure that if he also reached the town where his brothers had died, the same thing would happen to him. Rather than allow this, she thought she would prefer him to die on the way.

She prepared for him a food called cankey—which she filled with poison. Having packed it away in his bag, he set off. Very soon he began to feel hungry. Knowing, however, that his mother had not wished him to leave home, and therefore might have put some poison in the food, he thought he would test it before eating it himself. Seeing a vulture near by, he threw it half the cake.

The bird ate the cankey, and immediately fell dead by the roadside. Three panthers came along and began to eat the vulture. They also fell dead.

The young man cut off some of the flesh of the panthers and roasted it. He then packed it carefully away in his bundle.

A little farther on he was attacked by seven highway robbers. They wanted to kill him at once. He told them that he had some good roast meat in his bundle and invited them to eat with him first. They agreed and divided up the food into eight parts.

While they were eating the young man carefully hid his portion. Soon all the seven robbers fell ill and died. The young man then went on his way.

At last he reached the town where his brothers had died. Like them, he was summoned to the Assembly Place to answer the riddles of the Omanhene. For two days the contest proved equal. At the end of that time, the young man said, “I have only one riddle left. If you are able to answer that, you may put me to death.” He then gave this riddle to the Omanhene:

READ ALSO:  Importance of self discovery

The ruler failed to answer it that evening, so it was postponed till the next day.

During the night the Omanhene disguised himself and went to the house where the stranger was staying. There he found the young man asleep in the hall.

Imagining that the man before him was the stranger’s servant, and never dreaming-that it was the stranger himself, he roused the sleeper and promised him a large reward if he would give him the solution to the riddle.

The young man replied that he would tell the answer if the Omanhene would bring him the costume which he always wore at the Assembly.

The ruler was only too pleased to go and fetch it for him. When the young man had the garments quite safely, he explained the riddle fully to the crafty, Omanhene. He said that as they were leaving home, the mother of his master made him cankey. In order to find out if the cankey were good, they gave half to a vulture. The latter died. Three panthers which tasted the vulture also died. A little of the panther’s roasted flesh killed seven robbers.

The Omanhene was delighted to have found out the answer. He warned the supposed servant not to tell his master what had happened.

In the morning all the villagers assembled together again. The Omanhene proudly gave the answer to the riddle as if he himself had found it out. But the young man asked him to produce his ceremonial dress, which he ought to be wearing in Assembly. This, of course, he was unable to do, as the young man had hidden it carefully away.

READ ALSO:    Why Tigers Never Attack Men Unless they are Provoked

The stranger then told what had happened in the night, and how the ruler had got the answer to the riddle by cheating.

The Assembly declared that the Omanhene had failed to find out the riddle and must die. Accordingly he was beheaded—and the young man was appointed Omanhene in his place.